Skip to content Skip to menu
In Episode 2, Serial focuses in on Judge Daniel Gaul, a Cuyahoga Court of Common Pleas judge who handles a wide-ranging criminal docket.  The episode highlights Judge Gaul’s unorthodox courtroom behavior, including racially charged lines of questioning about family and home life, as well as Judge Gaul’s reluctance to use Cuyahoga County’s drug diversion courts. 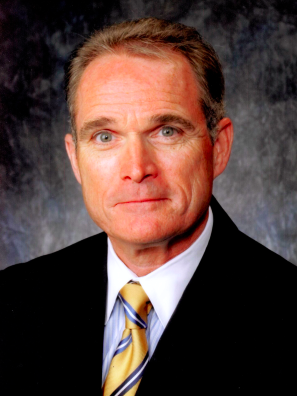 (Judge Daniel Gaul’s photo from the Cuyahoga Court of Common Pleas Website)
This response will cover a few areas:

“I think there are a lot of bad systems for selecting judges, but Ohio has managed to come up with the absolute worst one of all,” a law professor at the Ohio State University’s Mortiz College of Law once said.

In Ohio judges are elected.  Political parties endorse judges even though, at least in theory, the positions are non-partisan and political party affiliations do not appear on the ballot.

Partisan electioneering for non-partisan judicial posts can be a bit odd.  Just last night I was at my Ward’s Democratic Party club meeting, where we frequently have judicial candidates come to speak to us, particularly before the Democrats complete the endorsement process.  (Given the number of Democrats in Cuyahoga County, an endorsement from the Party can often assure a victory).  Judge John Sutula — who is briefly mentioned in this episode along with his cousin Judge Kathleen Sutula — came last night to talk to us about his bid for re-election.  Expecting that I’d be writing at some point about judicial elections in Cuyahoga County, I walked away with the available campaign swag — about 50 nail files encouraging re-election of Judge Sutula: 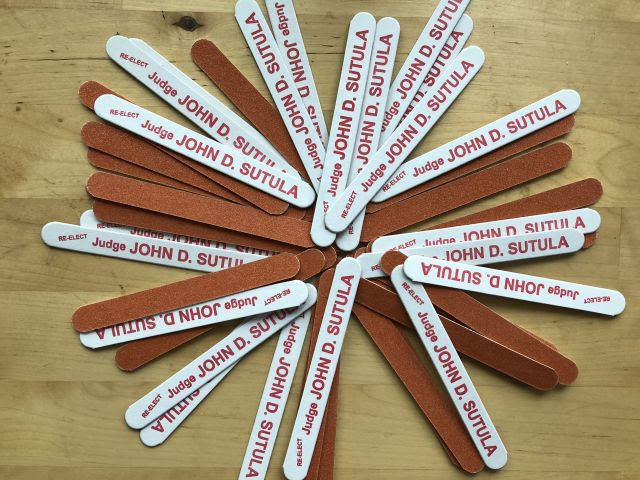 If you are wondering why Sarah Koenig was able to riff for so long on the Russos and the Gallaghers of the Cuyahoga County Courthouse, this is why.  Getting a judgeship in Cuyahoga County is often a matter of political connection.

(Of course, at this point the naming pattern could be self-fulfilling. In one instance, an unsuccessful judicial candidate in Cuyahoga County was accused of changing his name to a more common political name to support his next bid for office.)

In an effort to remove judicial elections from the partisan process in Cuyahoga County, four of the major bar associations in the area have created an independent website where they rate judges.  The Plain Dealer also gives separate endorsements.  But the Party system still holds on quite strongly.

I think many people listening will be outraged and offended by Judge Gaul’s actions and statements in this episode.

If you are wondering, Judge Gaul is up for re-election on the November 2018 ballot, running against a 46-year-old woman of color.  He is endorsed by the Cuyahoga County Democratic Party.  Gaul is rated better than his opponent by all four rating bar associations, including the Cuyahoga Criminal Defense Lawyers Association and the Norman S. Minor Bar Association, which is the affiliate bar association for black attorneys in the area.  However just this morning the Plain Dealer endorsed his opponent citing in part Judge Gaul’s behavior in recent years.

It will be very interesting to see the fallout from this episode.  If you all are interested, I will keep you posted on what I see and hear around town.  You’ll be hard pressed to find Democratic party officials who will come out against Gaul at this stage.  The endorsement process for this November’s general election is completed already.  The Cuyahoga County Democrats have a “unity pledge” requirement which ensures that active party officials (including me) cannot publicly support the non-democratic candidate.  If they do so, they can be impeached from their position within the Party.

I think many people will find one of the most shocking parts of Episode 2 to be Judge Gaul’s assertion that it was a probation violation if a defendant had a child out of wedlock while still under court control.  As Sarah Koenig rightly points out, this is flatly unconstitutional.  What she didn’t point out is that the leading court case establishing the right to control your family size actually came out of the Cleveland area as well.

In 1973, sixty-eight-year-old Inez Moore lived in East Cleveland with her her son, grandson and a cousin of her grandson’s.  East Cleveland at the time had a restrictive housing ordinance that limited the relationships of individuals who could live together under the same household.  The City of East Cleveland issued Ms. Moore a citation claiming that the second grandson was an “illegal occupant.”  When Ms. Moore refused to let remove the child from the home, she was charged criminally and given a $25 dollar ticket.

Attorneys from the Legal Aid Society of Cleveland took Ms. Moore’s case all the way to the U.S. Supreme Court. 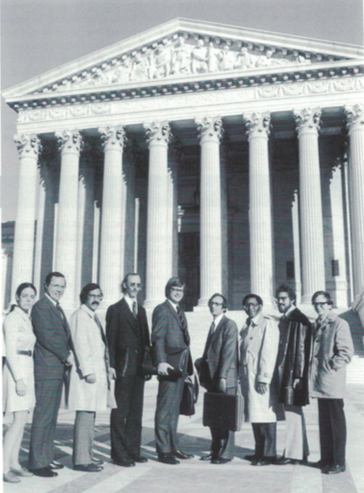 Ms. Moore won at the U.S. Supreme Court, where Justice Powell wrote that “freedom of personal choice in matters of marriage and family life is one of the liberties protected by the Due Process Clause of the Fourteenth Amendment.”  I’ve had a hard time finding a high-quality photo of Ms. Moore, but did find this from the Plain Dealer: 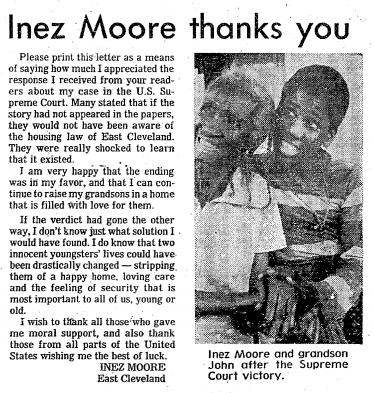 I’m not sure whether you could bring a court case against Judge Gaul if he never actually acted on his threat to find a probation violation based on having children (that’s a standing issue that law wonks are welcome to discuss with me separately).  But without a doubt, Ms. Moore’s case has established the constitutional precedent that allows individuals — regardless of their involvement in the criminal justice system — to have the families of their choice.  Judge Gaul’s claim otherwise, or the notion that he could punish somebody criminal for having a child out of wedlock while on probation, is facially unconstitutional.

Each week, I highlight a positive news story from around Cleveland — not to whitewash the difficult stories being told on Serial, but to add depth to this city for readers who might not know much about our town.  Bad things aren’t happening in the Justice Center because we are a uniquely bad town.  By highlighting something good along with the bad, I hope to make the need for criminal justice reform everywhere more tangible and approachable — and also explain why, despite the difficulties we face, I still have faith in Cleveland’s motto of “progress and prosperity.”

In Episode 2, I was struck by Judge Gaul’s questioning of a defendant about his relationship with his father.   First, I want to contextualize this racially-tainted line of questioning with some actual data, which shows that the stereotype of absentee black fathers is false, as well as social context, which helps demonstrate that the criminal justice system is part of what hinders paternal involvement.

But second, I want to show you these photos from the Father’s Walk, the day when fathers walk their kids to school.  It just so happens that the Father’s Walk happened the day Episodes 1 and 2 dropped.  You can follow along with the hashtag #NEOFathersWalk for other adorable photos. 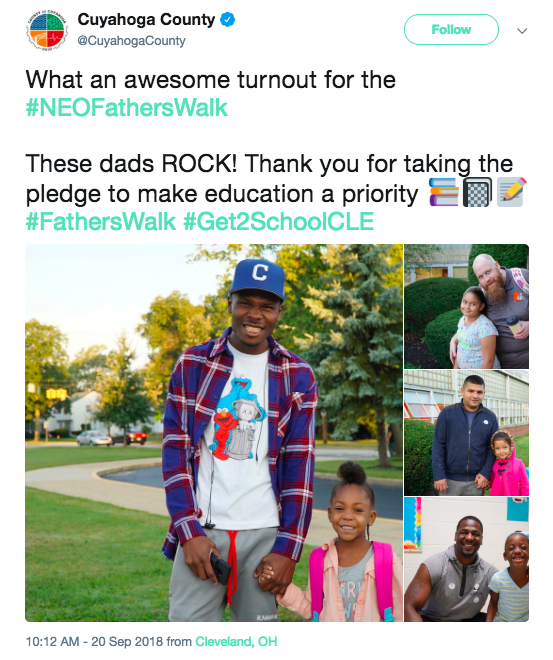