Episode 3 introduces listeners to the story of Erimius Spencer, a thirty-year-old black man living in Euclid who sustained injuries after an encounter with the police in his own apartment building.  Erimius and his attorneys need to address both the criminal charges brought against Erimius and the civil lawsuit Erimius is bringing against the officers.  Koenig weaves in pivotal background for anybody hoping to understand policing in Cuyahoga County: the story of Tamir Rice’s killing, the 137 Shots / Michael Brelo case, Steve Loomis, the police union, and the consent decree.

In this response, I will cover the following:

First, a note.  I am writing today about subjects that are deeply traumatic for many in Cleveland and around the country.  But because of the color of my skin, I am unlikely to ever experience this particular trauma myself.  On today of all days, I am thinking a lot about what it means to write about a form of violence that you are unlikely to experience yourself.  For instance, I find it incredibly difficult to listen to some male reporters who cavalierly dissect the details of the latest sexual assault allegations that continue to dominate our news cycle.  Yet I know that my writing on police violence against communities of color could illicit a similar response.  I do not enter into this process lightly.  Nevertheless, when the system is so unjust and when people who look like me have propped it up for so long through our inaction and acquiescence, I believe it is better to talk about these issues than be silent.

Koenig is right: you cannot talk about criminal justice in Cleveland without talking about Tamir Rice.  The case is “right at the surface . . . still painful, still unsolved.”

This episode talks a lot about what the Cleveland police should or shouldn’t have learned from Tamir’s case — and it gives a hell of a lot more air time to Steve Loomis than it does Samaria Rice.  And so, before we do anything else, I want to take a moment to remember Tamir, not as a symbol, but as a boy and as a son who was playing in a playground.  Before Tamir was a clarion call to recognize that black lives matter, he was a child taken from his mother.  She posted this only a few days ago: 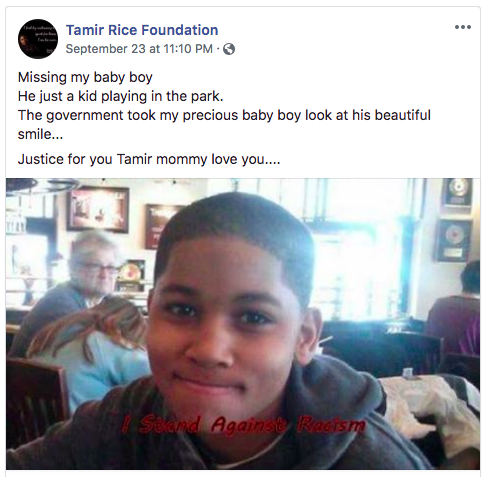 Koenig briefly mentions the four investigations and Tim McGinty, the prosecutor who, Koenig says “handled the case with the delicacy of a lumberjack.”  As she mentions, a grand jury declined to indict the officers involved.  But listeners need to understand more about the grand jury to know why so many in Cleveland feel as though justice was not done in this case.

An indictment by a grand jury is the mere finding of probable cause to move forward with a case.  A joke in legal circles is that a prosecutor could indict a ham sandwich.  That is to say, the indictment is so easy, such a minimal standard, that grand juries rarely fail to return an indictment.  For instance, in Episode 1, Anna could be indicted for assault on a peace officer merely by the detective observing her fist’s contact with the officer’s body.

Many believe that if Tim McGinty had wanted this case to go through the justice system, he could have gotten an indictment in a matter of minutes based on the video evidence.  Instead, the prosecutor’s office took numerous unorthodox steps.  We still don’t know exactly what happened in the grand jury because the transcripts are sealed.  But one witness in a 2016 article that closely chronicled the irregularities said “I’ve definitely never seen two prosecutors play defense attorney so well.”  McGinty commissioned his own expert reports which concluded that the officers’ actions were “objectively reasonable.”  And the officers involved were allowed to read written statements to the grand jury but invoke their Fifth Amendment right in declining to answer any questions, despite legal precedent that they waived their Fifth Amendment privilege by testifying at all.

The non-indictments were announced on December 28, 2015 — a particularly dreary day with a biting cold mist.  It is still a persistent story around town that the prosecutor’s office waited for exactly this kind of day — with bad weather and folks focused on the holidays — to announce the non-indictment.

I was at my apartment on the near west side of Cleveland when the non-indictment was announced.  Ten minutes to south, the Christmas Story house was in its peak tourist season; visitors were being shepherded through the filming locations for the campy 1983 holiday movie of the same name.  Visitors were probably laughing to themselves, remembering the movie’s running gag line about the risks of giving a young (white) kid a toy gun for Christmas: “You’ll shoot your eye out, kid.”

Ten minutes to the west of my apartment sat the Cudell Rec Center, where Tamir Rice was killed for having just such a toy.

Tim McGinty was voted out of office in the next election after the non-indictments.  Cleveland’s Black Lives Matter group played a key role in holding off the Cuyahoga County Democrats from endorsing McGinty or his opponent, giving the non-incumbent a fighting chance.  In 2017, Steve Loomis lost his bid for re-election to head of the Police Union by 38 votes out of 736 that were cast.  But the police union gave him a platform for years to spew the type of racist vitriol he got to repeat again on today’s episode.

None of those involved in Tamir’s killing were ever indicted. In May 2017 one of the officers was fired from the Cleveland police force for lying on his job application years earlier; he hadn’t disclosed that the department he had worked for previously had deemed him unfit for duty.

At the beginning of the episode, Samaria Rice says that corruption in the Cleveland police force has gone on for “seventy years”.  Understanding this history is important to understand what is happening today.  While there’s a lot to the story, today I’m going to talk about the 1960s and the creation of the the police union.

In the 1960s, racial tensions and community-police tensions were running high throughout the country. Cleveland was no different.  A particularly pointed example in Cleveland was the 1964 effort to bus black students to the all-white Murray Hill Elementary School in Cleveland’s Little Italy neighborhood.

On January 30, 1964, an all-white mobs attacked black supporters of integration despite the presence of dozens of policemen. 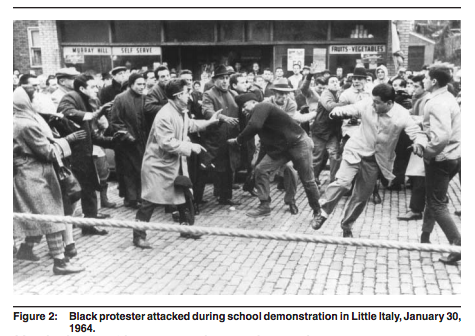 The next day, demonstrators began a sit-in at the Board of Education demanding equal educational opportunities for all students.  “On February 4th, the situation reached an explosive climax when police dragged the demonstrators down the stairway from the third floor and arrested 22 of them on various charges of obstructing and assaulting police as they cleared the hallways.” (Davis, 381)

The Call and Post published this impassioned full-page editorial, which demonstrates the frustrations from the black community around policing in response to the incidents at Murray Hill.

The “pressure cooker” analogy used in this editorial would bear fruit.  In 1966, riots broke out in the Hough neighborhood (a story I hope to discuss in greater detail in a future week).  Among other results, the Hough riots spurred the business community to throw its support behind Carl Stokes for mayor as a form of “insurance” against future racial tensions.  Bolstered by the business community and strong support of the city’s black community, Stokes became the first black mayor of a major American city in 1967. 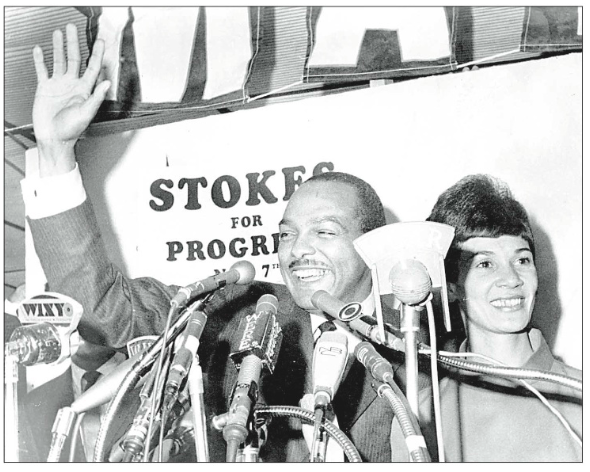 However, on July 23, 1968, only a few months after launching the program, a gun battle erupted in the Glenville neighborhood between Cleveland police and a group who called themselves Black Nationalists of New Libya.  The Black Nationalist group was lead by Fred Ahmed Evans, a radicalized army veteran.  The “Glenville Shootout” lasted two days and lead to seven deaths and numerous injuries.  Included in the dead were three police officers.  A fourth officer died years later from injuries sustained in the fight. 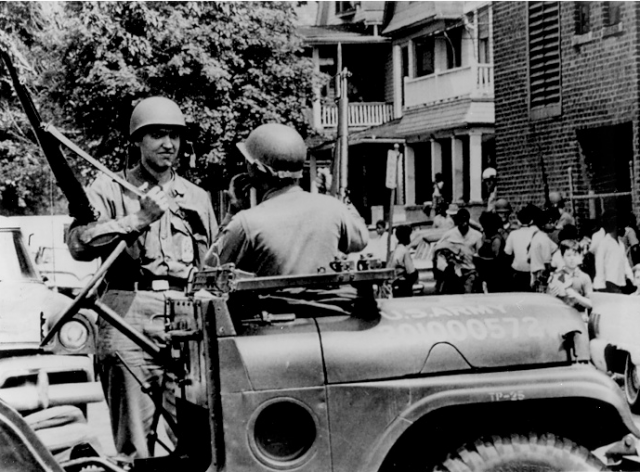 After the shootout ended, it emerged that Fred Ahmed Evans had applied for a small grant from Stokes’ Cleveland: NOW! program.  Instead of using the funds for an education program, Evans had used the grant to purchase the weapons used in the shootout.  Carl Stokes rapidly lost support from the business community, and their appetite to support the ambitious Cleveland: NOW! program dried up.  Carl Stokes was vilified for what happened and few of his planned reforms went into effect.  He didn’t run for re-election in 1971.Aside from the political fallout, the Cleveland police rank-and-file also blamed Carl Stokes for what happened.  Anonymous officers uttered racial epithets over police radio and scrawled on city hall corridors that Carl Stokes was wanted for murder.

The Glenville Shootout resulted in the creation of the Cleveland Police Patrolman’s Association — what we commonly call the police union.  According to the union’s own history, the union was born out of officers’ beliefs that they didn’t have the support or tactical gear necessary to handle the situation in Glenville.

But some community members — who have dealt for decades now with the heavy-handed Cleveland police force, bolstered by a union headed by people like Steve Loomis — see the union’s origin story another way.  Amidst the undeniable tragedy of the Shootout, they see the union as an institution born out of a moment to reign in Stokes’ influence within the city.  They see the union as born of an effort to better control black communities, even those that had no connection to the violence in Glenville.

This history is still important context today.  I was at a panel discussion just last month on organizing within the black community and the police union’s origin in the Glenville Shootout came up, sparking murmurings of frustration from the crowd.  This history is very much alive and well.As discussed in the episode, it’s unclear where the culture of the CPD and the union will go from here.  Cleveland is training a large number of cadet classes to fill vacancies on the force.  The cadets don’t get a fresh start.  They are joining an institution that is decades in the making.

Modern-day activism around the consent decree and police reform

The federal consent decree mentioned in the episode mandated the creation of a Community Police Commission.  The commission holds regular meetings, like the one featured at the beginning of the episode.  The upcoming ones are:

The consent decree was supposed to be fully implemented in five years.  However, the most recent report from federal overseers indicates that the required reforms may take longer.

If you live in Cleveland and want to get more involved, it cannot hurt to get to know the officers patrolling your area.  I suggest looking up which District you live in, and keep an eye out for public safety meetings or community relations meetings, which are usually handled on a district-by-district basis.

One last note: one possible reform raised by the story in this episode is the question of whether off-duty police officers should have to wear body cameras.  Koenig is right that police officers here frequently moonlight security jobs in full uniform.  But they are not required to wear their body cameras while doing so — at least not in Cleveland and not (to my knowledge) in Euclid.  Body cameras could have made a difference for Erimius Spencer.  If the officers in the apartment building had had body cams on, the judge would have had much more to go on than he-said-she-said testimony at the suppression hearing.

This week’s episode covered some raw and recent history.  I want to leave you with what I can only describe as one of the most impressive attempts I’ve ever seen to collectively process an event and try to progress forward from it: the playwrights who came together to write “Objectively / Reasonable” — a “documentary play” on Tamir Rice and the 137 Shots case. 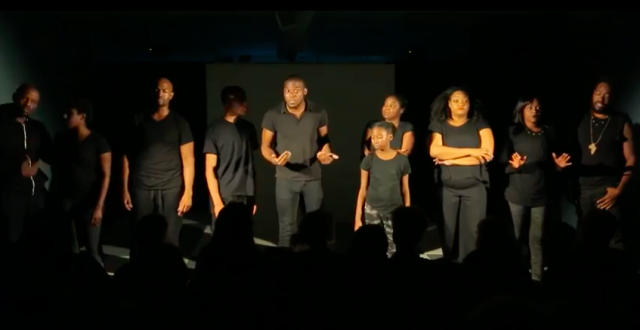 You can watch 9 minutes of it here and get some more background on the impressive cast here.