Episode 4 turns to the epidemic of gun violence and, in particular, a heartbreaking shooting that left 5-month-old Avielle Wakefield dead.  Koenig introduces us to Tink — the man who was falsely accused of the Avielle’s murder and imprisoned for more than a year while awaiting trial.  Koenig tries, to no avail, to get answers about who really shot Avielle.  She uses tape from Tink, Avielle’s father, and other community members to explore the “code” that forbids residents from snitching or cooperating with the police.

As Koenig mentions at the start of the episode, listeners may have found content in this week’s episode distressing.  The graphic descriptions of violence against young children is devastating to listen to.  But others may also find the refusal of community members to work with police equally disquieting.  Indeed, the episode dwells on moments that may seem to confirm many people’s worst beliefs about poor urban neighborhoods.

If you found yourself bewildered and frustrated by what you heard, and unconvinced by Koenig’s fleeting rationalizations, I recommend taking a deeper dive into the phenomenon discussed throughout this episode by reading Jill Leovy’s Ghettoside, which focuses on how communities like Avielle’s are both under- and over-policed at the same time, making residents genuinely fearful to interact with law enforcement.  If you don’t have time for the full book, the New York Times review is here, an excerpt is here, and a Fresh Air interview with the author is here.

To add context to Episode 4, this week’s response will discuss the following:

Mount Pleasant and the Shaker-Cleveland border

Avielle was killed at East 145th Street and Kinsman, which is about six miles southeast of downtown Cleveland. 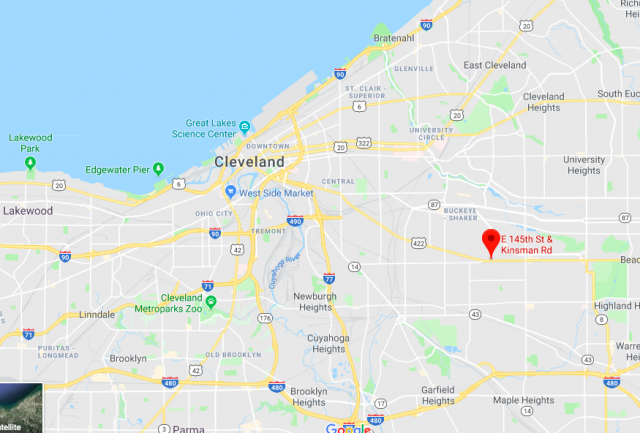 While that intersection is technically in Cleveland’s Mount Pleasant neighborhood, it is mere blocks from the border with Shaker Heights, one of Cleveland’s most prominent and storied suburbs. 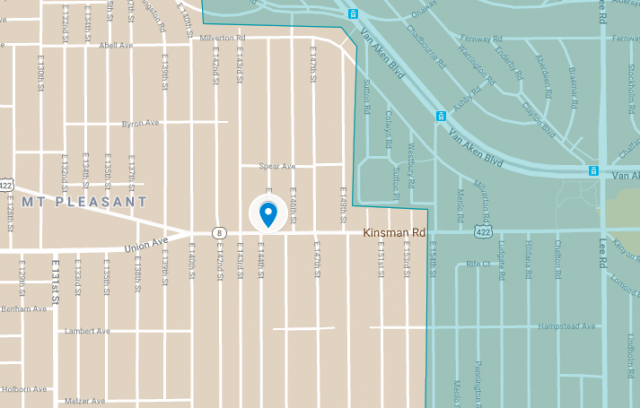 Created using Google Maps.  The shaded area to the east shows the border between Shaker Heights and Cleveland.  East 145th and Kinsman is identified with the blue marker

And, finally, the dividing line between Mt. Pleasant and Shaker Heights is a dividing line that has been manufactured over decades and decades of active policy choices. 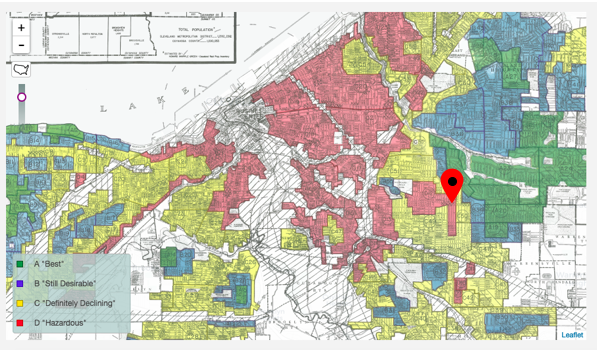 1939 Housing Quality Map made available online via the University of Richmond.  E 145 and Kinsman identified with the red marker.

The above map is from the 1930s effort by the federal government to grade and rate neighborhoods.  Maps like these were used to determine who could get home loans and where investment would flow.  And, as a result, they helped entrench and codify the racism and inequalities of the era in which they were made.

The disparities identified by the 1939 federal map became self-fulfilling prophecies.  The disparities were helped along the way by action from local government.  For instance, if you look a few blocks to the east of 145th and Kinsman, you’ll see that various streets marked “Sutton” do not actually connect from Cleveland to Shaker Heights

Shaker residents approved a bond measure in 1968 to close these streets in order to build town homes under the name of Sutton Place.  According to historian Mark Souther, “the new developments would enable the exclusive suburb to not only cut off three Cleveland streets at the city limits, but also begin to create a buffer to protect its pricier residential neighborhoods and rid itself of its most affordable houses.”  This project presaged the “divisive installation of street barricades” that dissuaded drivers from entering Shaker from Mt. Pleasant. 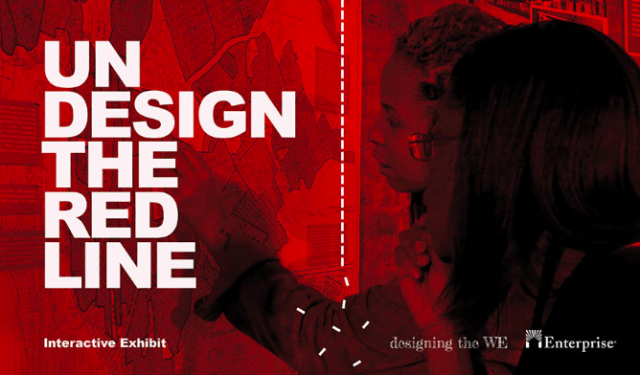 Public health experts are increasingly viewing gun violence through the lens of a public health epidemic and seek to study it the same way you would any other contagion.  In an episode that revolves around the death of a young child due to this type of public health crisis, I would be remiss not to add context about one of Cuyahoga County’s other public health crises: infant mortality.

On average, in the United States there are 5.9 deaths before the age of 1 for every 1,000 live births.  In recent years, Cuyahoga County’s infant mortality rate has been higher than the national rate, hovering at around 8 to 9 deaths for ever 1,000 live births.  But when broken down by race, the numbers are far more disturbing.  In the last 10 years, infant mortality for black children has been as high as 19.5 — worse than the rate in many developing countries.  Preterm birth, perinatal complications, birth defects and sleep-related deaths all rank high in the potential causes for these deaths, but the obvious racial disparities in the numbers raised alarm bells for many in the public health field:

In response to the crisis, the city launched the First Year Cleveland, which is “urgently focused” on lowering the rate of infant deaths to 6.0 per 1,000 live births by the year 2020:

Prominent Cleveland leaders have all rallied around this issue in recent years.  (The First Year Cleveland strategic plan committee members and affiliated groups list is a who’s who of city leaders and prominent organizations).

But just a few days ago, one initiative that is affiliated with First Year Cleveland announced that there were 0 deaths in the first year of life in the 44128 area code, which has historically had seen 7-8 deaths annually.  It’s a needed start.

Episode 4 briefly mentions the legal concept of felony murder in describing the feud that may have lead John to implicated his friend Tink in Avielle Wakefield’s death.

Many argue that the felony murder rule leads to unjust outcomes.  Consider the story of Tyra Patterson, a 19-year-old-girl given a 45-year-to-life sentence in 1994 under Ohio’s felony murder rule for supposedly snatching a necklace during a robbery in which somebody else ended up shooting and killing a victim. 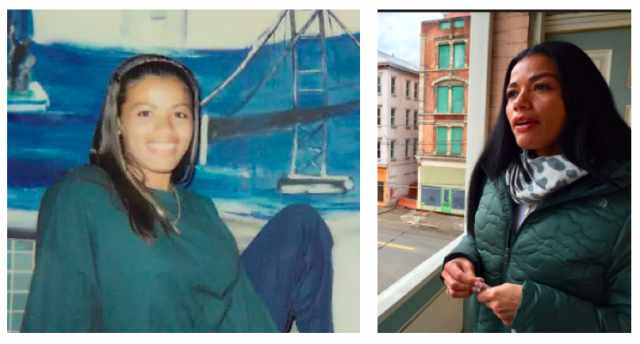 Tyra denied that she participated in the robbery by taking the necklace — in fact, Tyra called 911 and offered information to police about who had been involved.  Instead, when she went down to the station, the police implicated her in the crime and she was charged with felony murder.  (Is it any wonder that stories like this “ricochet” around communities, as Sarah Koenig says in Episode 3, and ultimately dissuade people from working with the police?) 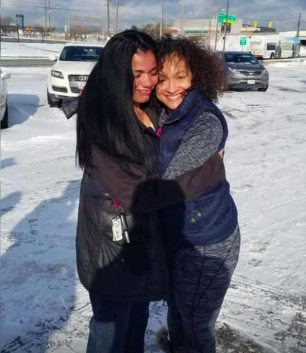 In the 2000s, Ohio joined 4 other states in effectively eliminating the felony murder rule.  There are reform efforts at eliminating the rule across the country.  The Felony Murder Elimination Project has been advocating the end of California’s felony murder rule, which even authorizes life without parole (LWOP) for those convicted.  Over 700 people are serving such life sentences for murders that they did not commit.

SB 1437 has been steadily making its way through the California legislative process and Governor Brown signed it into law yesterday.  The bill will completely reform California’s felony murder rule and will allow those servicing life without parole for felony murder to apply for retroactive resentencing.

​Cleveland’s youth are no exception.  There are a variety of groups aimed at crime intervention and decreasing gun violence that affects children.  This summer saw the 10th Annual Youth-Led March Against Violence in Cleveland’s Glenville neighborhood.

The boy with the megaphone in the first photo is 11-years old.  He chanted “Stop the violence,” to which the crowd responded, “Put the guns down.” 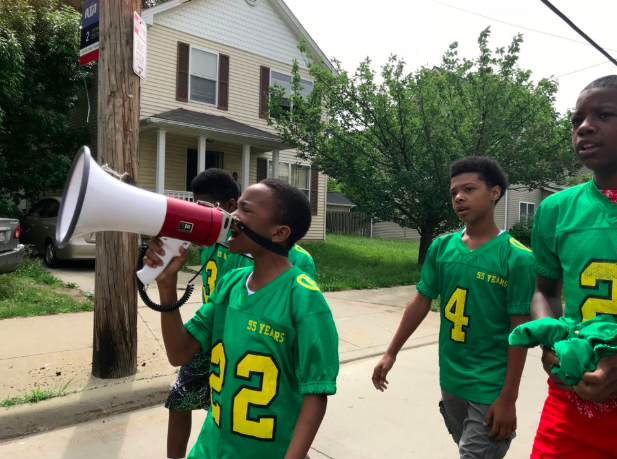 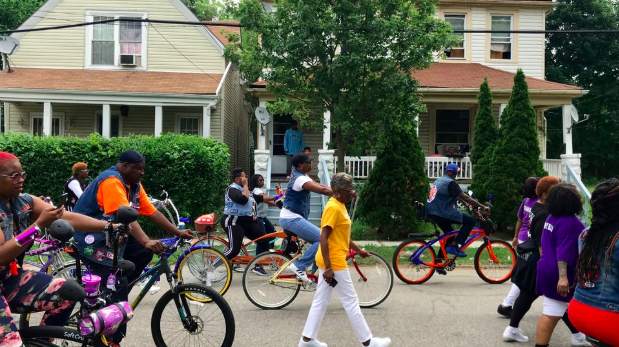 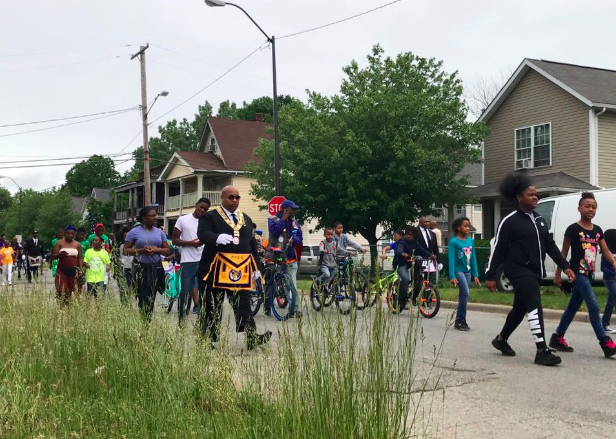