We return briefly to the killing of 5-month-old Avielle Wakefield and hear from Assistant Cuyahoga County Prosecutor Brian Radigan about what led him to dismiss the charges against Davon Holmes.  Koenig argues that prosecutors are perhaps the most powerful people in the Justice Center and that prosecutors use the arsenal of layered indictment charges to force plea bargains and determine sentences away from judicial oversight.

To illustrate these ideas, Koenig tells the story of Dominique Williams, accused of a killing outside the M&M Saloon on Cleveland’s west side, Abdul Rahman, an older man who kills 39-year-old Andrew Easley after an altercation on an RTA bus that is caught on video, and Alan Buford, a Cleveland Police Officer acquitted of a negligent homicide charge for killing an unarmed man outside a grocery store.

In this response, we’ll discuss the following:

And we’ll finish up with a quick tour of some great places around Cleveland where you can get a real ham sandwich (or something like it).

The Philosophy of Criminal Punishment

One of the most striking moments in the episode is when Koenig talks to Assistant Prosecutor Radigan about what Avielle’s father would consider justice for the person who killed his daughter.  Koenig tentatively tells Radigan:

He could balance the scales in his head with a 10 year sentence.  That seemed about right to him.

Radigan disagrees, asking Koenig whether 10 years isn’t low for killing a kid.  Koenig meanders for a while, talking about whether 10 years is long enough for a defendant to see the error of his ways.  Radigan’s response is simple: “Shouldn’t there be some aspect of a significant punishment?  I don’t know that 10 years, after taking the life of somebody, is enough.  I just don’t.”

This moment is striking and, to explain why, I want to give a quick primer on different philosophies behind punishing somebody for committing a crime:

In viewing the exchange through this lens, it becomes clear that Koenig and Radigan cannot agree because they are approaching the question from completely different frameworks.  Koenig starts with a restorative approach: Avielle’s father suggests 10 years, so we should take that recommendation seriously.  But Radigan is steeped in retributive justice.  He wants the criminal to pay the price, and, given what he sees day to day, he knows that 10 years is just too low a price.

When Koenig responds, she pivots into a rehabilitative argument — shouldn’t 10 years be enough to learn the error of your ways?  But rehabilitation isn’t of interest Radigan.  His is working in a retributive model.

Shouldn’t there be some aspect of a significant punishment?  I don’t know that 10 years, after taking the life of somebody, is enough, I just don’t.

Understanding and articulating our philosophy of punishment is an important part of any criminal justice reform.  Indeed, when Philadelphia recently elected a former civil rights and defense attorney as chief prosecutor, his first effort at reform was grounded in moving prosecutors away from a retribution-based system.  When we better understand the purpose behind punishing people, we can better envision the ways the system could change.

To give you an example of how one local judge is handling the question of sentencing, I want to take you on a short walk from the Justice Center to Cleveland’s federal courthouse:

By way of reminder, the prosecutors in the Justice Center handle crimes that are charged under state law.  By contrast, the prosecutors in the federal courthouse handle crimes that are charged under federal law.  There can sometimes be overlap in whether criminal behavior is charged by the state or federal government, but straight-forward examples of federal crimes include tax fraud, assault or theft on federal property, or drug trafficking between states.

(For a more light-hearted and exhaustive approach to federal crimes, feel free to follow the Crime A Day twitter account which catalogs criminal prohibitions in federal regulations such as the fonts allowed on cigar packaging and the number of llamas allowed in quarantine facilities.)

As a general rule, federal court is more professional and structured than state court.  But because the cases are more well developed, federal prosecutors are also less likely to significantly plea down the charges.  The federal sentencing guidelines are a thick book that helps judges determine a “guidelines” sentence based on two factors: how severe the crime at issue was and the defendant’s previous criminal history. 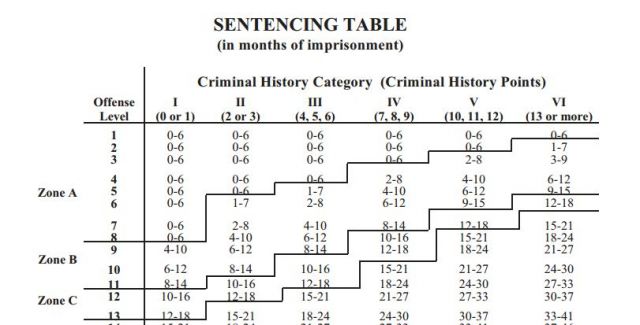 The first part of the federal sentencing guidelines table.  Offense levels go up to 43 with corresponding sentences of 30 years to life.

One of the judges in the Cleveland federal courthouse — Judge James Gwin, who, full disclosure, I worked for from 2015-2016 — has studied how the public’s standards of “just” punishment have diverged from the federal sentencing guidelines.

In one notable instance, the jury’s average recommended sentence was 14 months — a little more than one year.  By contrast, the Guidelines range was between 21 and 27 years.  Judge Gwin gave the defendant the minimum sentence allowed — 5 years — citing the jury poll.  The federal prosecutor’s office appealed the sentence to the Sixth Circuit, saying that relying on the jury poll was improper.  The Sixth Circuit disagreed, and upheld the 5 year sentence.

Reducing sentences to bring punishment more in line with community sentiment is one approach to sentencing reform.  Another approach altogether is to bring in the idea of restorative justice — i.e. focus on what it takes to heal the victim and the community from the crime.

Baltimore, for instance, has a well-established juvenile restorative justice program that mediates conflicts as they arise and can even handle some juvenile criminal charges. 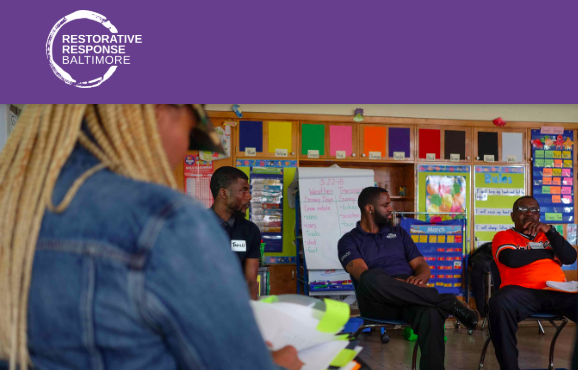 Perpetrators sit down with victims and community representatives to talk through what happened and agree on an appropriate punishment.  95% of their mediations result in a written agreement between the parties, and those agreements are followed 95% of the time.  Although, as Koenig notes, academic research is scarce, the initial evidence is that when restorative justice is utilized in criminal cases, recidivism is lower.  And because the point of restorative justice is to create a punishment that feels appropriate to the victim –rather than what the prosecutor deems to be “enough” punishment — victims are more likely to report that they feel justice was done in their case when restorative principles are used.

Cleveland has begun to move towards pilots in a restorative justice model at some schools.  But it is not widespread and is, to my knowledge, not currently used in the area’s criminal justice system.

We spent a lot of time on the bus in this episode — the 3 bus, in fact, which goes from Public Square to the eastern end of the Red Line at Windermere Station.

Windermere Station.  Courtesy of the RTA

The route from public square to Windermere Station is one of the oldest in Cleveland.  It was established as part of the extensive streetcar system built in the early twentieth century: 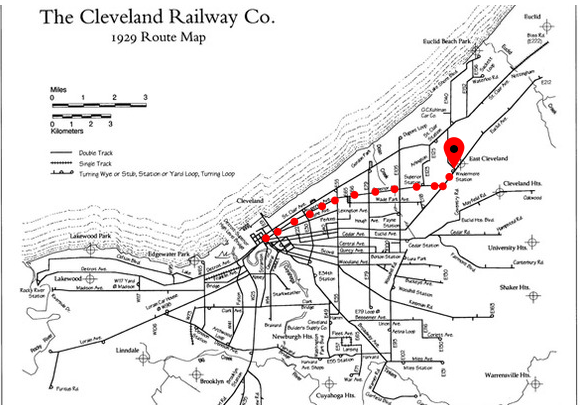 1929 streetcar map.  The route of the 3 bus ending at Windermere Station is noted in Red.  Underlying map is courtesy of GreenCityBlueLake.org.

Getting from the heart of downtown to what is now Windermere station was particularly important because the area was, at that time, a storage facility for the electric streetcars used throughout the system. 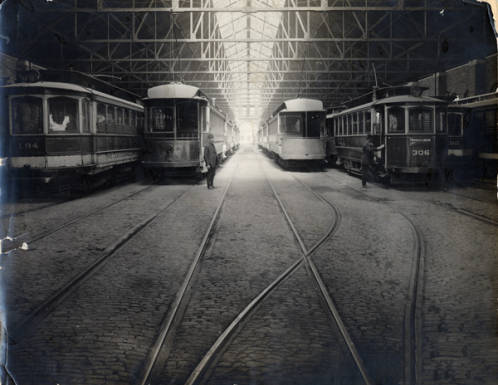 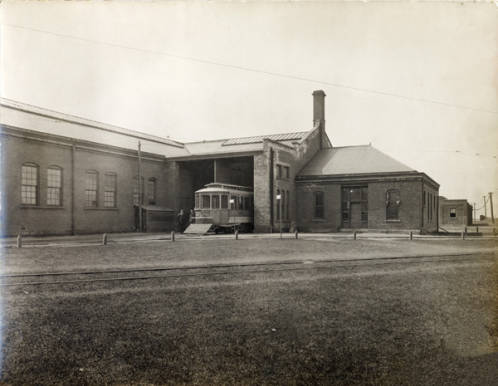 During World War II, gasoline rationing encouraged use of the transit system, which hit an all time high of 493 million rides in 1946.  Since that time, the area’s transit system has gone through many changes.   The streetcar system was shut down in the 1950s to be replaced with the light rail and bus system we have today.  (Cuyahoga County has recently begun offering once-yearly tours of the remnants of the streetcar system under the Veterans Memorial Bridge downtown.  If you haven’t gotten to go, set your calendars for next year — it’s great.)

Management of the county-wide transportation system was handed over to the newly-created Regional Transit Authority (RTA) in 1974.  Ridership stayed at over 100 million through the 1970s, but declining populations, and increasing reliance on cars put strain on the system, which has since fallen to less than 50 million rides per year.

Koenig is right that the RTA responded to a number of violent incidents in 2012 by spending 2.5 million to outfit the entire bus fleet with cameras.

Most recently, service cuts and fare hikes have been a source of frustration for both riders and economic development groups, who see the limited services as a weight on the region’s economy.  When Public Square was redeveloped before the 2016 Republican National Convention, a flashpoint arose around the RTA’s effort to route buses around the square, rather than letting them go through the middle.  After pressure from a riders group and a rebuke from the Federal Transportation Authority, RTA agreed to change its policy.

Clevelanders for Public Transit is the active organizing group in this sector.  CPT is focusing its efforts on increasing services and fixing a budget shortfall caused by the loss of tax revenue.

Well, I beat Sarah Koenig to the “a grand jury would indict a ham sandwich” cliché by two episodes.  She’s reluctant to expound on the term, but you can check out my response to Episode 3 for a discussion of the phrase’s origin.  In the meantime, I thought I’d take the opportunity to tell you some great stories about places around town where you can get an amazing ham sandwich — or something like it.

First up is Saucisson, a woman-owned butcher and sandwich shop that opened up in the heart of Slavic Village — an area that had been devastated by the foreclosure crisis and hadn’t seen much in the way of new storefront investment in years. 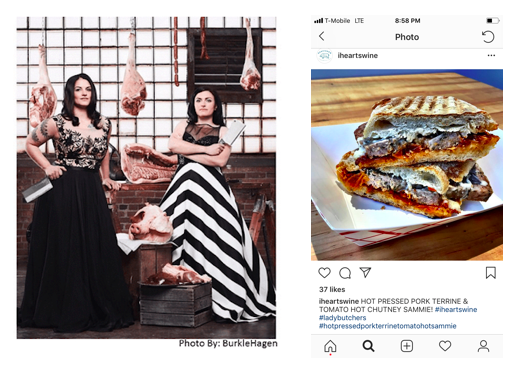 Next is the new La Plaza Taquería — set to open in about two weeks.   Adrian Ortega has been serving some of Cleveland’s best street-style tacos out of the back of the La Plaza Supermarket since 2011.  But his tacos have become so popular that he is getting a separate storefront for more space and customer capacity.  You can go for the chorizo option if you are looking to stay with the pork theme. 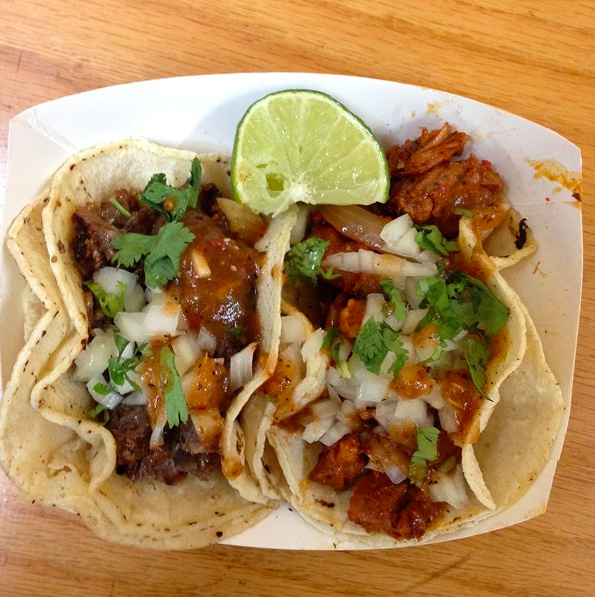 Finally, if you are not a carnivore, you can try one of Cleveland’s surprisingly large number of vegan options.  I certainly haven’t tried them all, but I can definitely vouch for the Bravocado Sandwich at the Beet Jar Juice Bar, which has a healthy layer of toasted coconut flakes and avocado to fill you up. 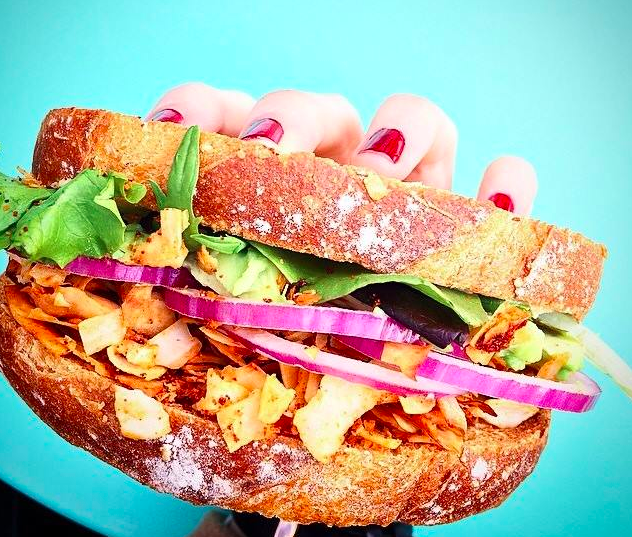