Episode 6 unfolds in East Cleveland — the small city of 17,000 that sits on Cleveland’s eastern border. 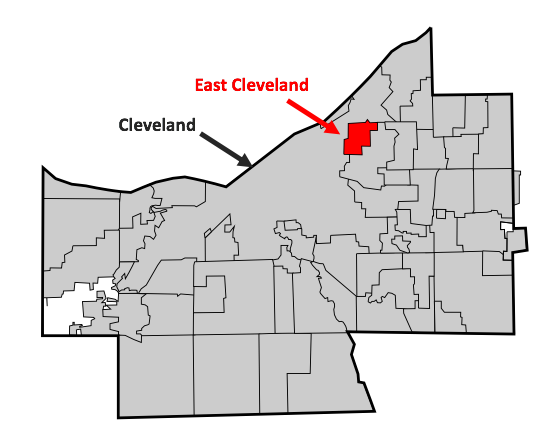 (Modified from this source)

We follow the story of Jesse Nickerson and Arnold Black, both victims of violence at the hands of the East Cleveland Police, both unable to get any justice through a civil lawsuit because East Cleveland does not have the money to pay out judgments. Koenig and Emmanuel Dzotsi argue, in part, that the lack of oversight by the civil lawsuit system has led to continued misdeeds by East Cleveland.

In 2012, Arnold Black was imprisoned for days in a makeshift holding cell that had no bathroom facilities or access to water.  His subsequent civil lawsuit went to a full trial, where the abuses and mismanagement by the City of East Cleveland were put on full display.  Black won a $22 million verdict.  However, it was reversed on a technicality and his case is still unresolved.

Next, we meet Jesse Nickerson who survived a 2016 incident where he was assaulted by East Cleveland Police officers.  The incident resulted in convictions against one of the officers involved.  (The prosecutor Ashley Kilbane, who we hear arguing for the officer’s conviction, is currently running for judge in Cuyahoga Common Pleas).  Emmanuel Dzotsi continues to follow Nickerson, who is being closely watched by other East Cleveland Police Officers.  Nickerson is given misdemeanor charges after an incident on the 4th of July.  When he appears in court on the misdemeanors, he’s ultimately arrested.  The episode ends with the revelation that Nickerson was locked up in the same makeshift holding cell where Arnold Black was kept — raising the question of whether anything has changed or even can change in East Cleveland.

This week’s episode focuses exclusively on East Cleveland, as will my follow-ups for this week:

Updates From Prior Episodes

Before I go on, two quick follow ups from previous episodes.  In the last episode we briefly heard about a Cleveland police officer who was acquitted of negligent homicide in the killing of an unarmed man outside a grocery story.  We learned yesterday that the police officer will be reinstated to the Cleveland Police Department with full back pay.  The police union’s arbitrator determined that there had been no basis for firing the officer.

In contrast, we learned recently that the officer who killed Tamir Rice was unable to secure a job with the small police force in Bellaire, Ohio after public outcry. 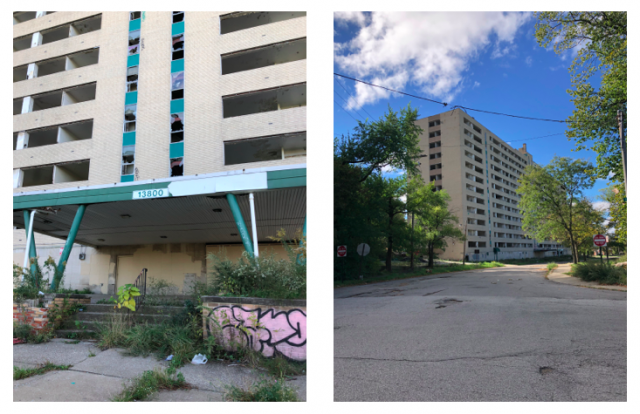 Huron Place fell into disrepair when the out-of-state owners failed to maintain the building and the City declared it unfit for human habitation.  The abandoned complex is only a few hundred feet from the local middle school and is also close to a variety of active apartment complexes and senior citizen living facilities.  It is a constant hazard for local residents.

Of course, Terrace Road isn’t the end of the ruin tour for many, who might also head to streets like Chapman Avenue, which was recently described as a “war zone” by the local press.  A Facebook video showing Chapman’s disrepair recently garnered more than 2 million views.

There are many smart and thorough critiques of ruin tours, which I will leave you to consider from a philosophical perspective.  But I think a lot about ruin tours from a pragmatic perspective as well.

You can’t drive around Cleveland without passing something that that could go on one of these tours, and it’s hard not to gape and then feel guilty for gaping.  I’m not sure I have the best approach, but when I’m trying to observe these places without exploiting them, I try to shift my attention to resiliency, looking for neighbors who have kept going despite everything happening around them.

For instance, on my way to the East Cleveland Public Library this afternoon, I passed this beautiful house,

only a few doors down from this, 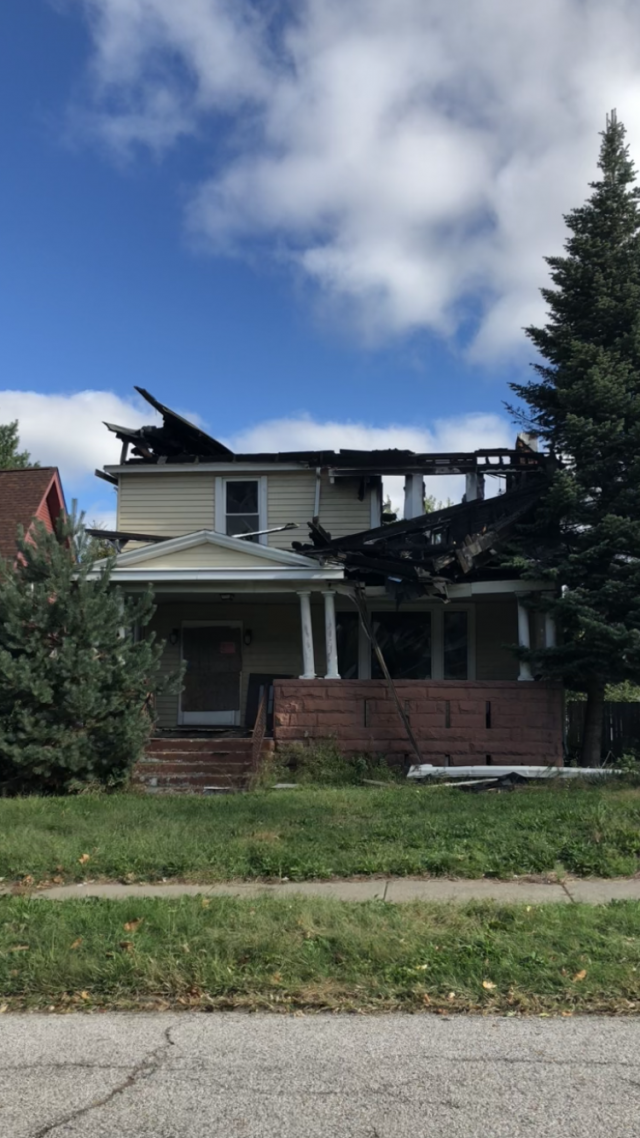 That’s resiliency if I ever saw it.  There are similar examples all over East Cleveland and Cleveland.  As with any Rust Belt ruin tour, the ruin is only a small part of the story.

East Cleveland was officially incorporated in 1911 and was a majority white community with a variety of European ethnic enclaves during the early part of the 20th century.

The city takes pride in a number of historic features from this era.  The city’s 1916 charter gave women the right to vote — one of the only cities in the country at the time to do so.  John D. Rockefeller had a home in East Cleveland’s Forest Hills neighborhood. 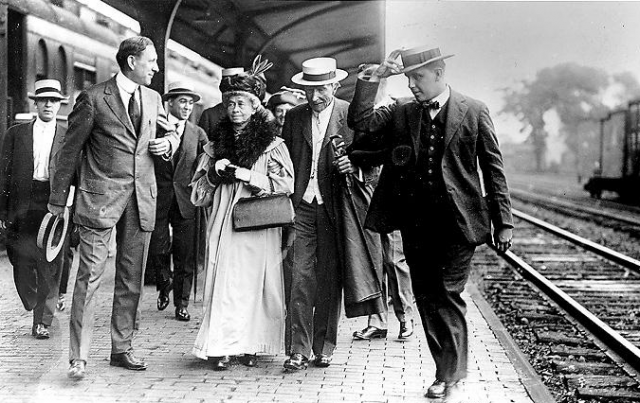 John D. Rockefeller with family at the Coit Rd. Station in East Cleveland, 1912.
Courtesy of the Western Reserve Historical Society. 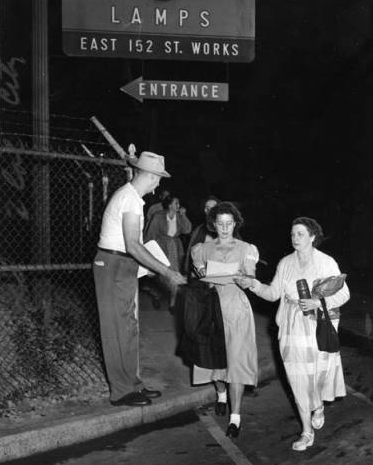 East Cleveland’s heyday began to wane in the 1950s. As Dzotsi briefly mentions, East Cleveland’s decline can be viewed through the lens of structural racism. Before the 1960s, Cleveland’s black communities had been almost completely confined to a few neighborhoods including Hough and Central. In the 1960s, housing options opened in neighborhoods like Lee-Harvard and true suburbs like East Cleveland. In the years that followed, tens of thousands of middle-class black residents relocated to these areas seeking better fortunes.

However, the result of this rapid shift in racial demographics was equally rapid blockbusting — the process of  encouraging white homeowners to leave by stoking racial tensions.  The process was transparent and clear to all who watched the transformation in East Cleveland at the time.  Consider this opening paragraph from a book on East Cleveland’s development written in 1969 — while this process was still unfolding. 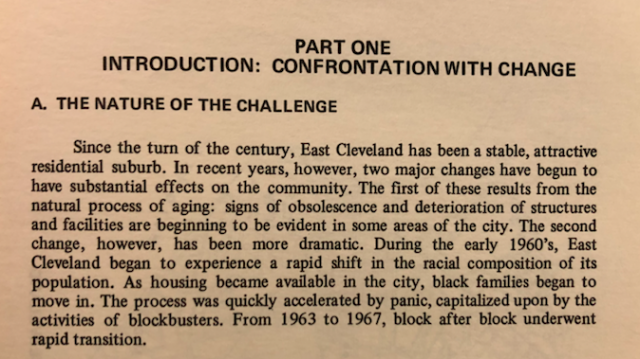 East Cleveland: A Response To Urban Change, 1969.
Not to be reproduced without written permission of the Western Reserve Historical Society.

As you can imagine, blockbusting led to a rapid swing in demographics.  By the mid-1970s, East Cleveland was almost entirely African-American.  Soon enough, the problems that had plagued segregated, disinvested communities like Hough and Central began to settle upon East Cleveland as well.

This condensed history takes us up to the 1980s.  As we turn to the 1990s and 2000s, you already know there is a lot more ruin ahead in East Cleveland.  And so, before moving on, I’ll leave us with two small examples of resiliency.  Here are students in East Cleveland’s Rozelle Elementary School learning violin through the Suzuki method in 1981 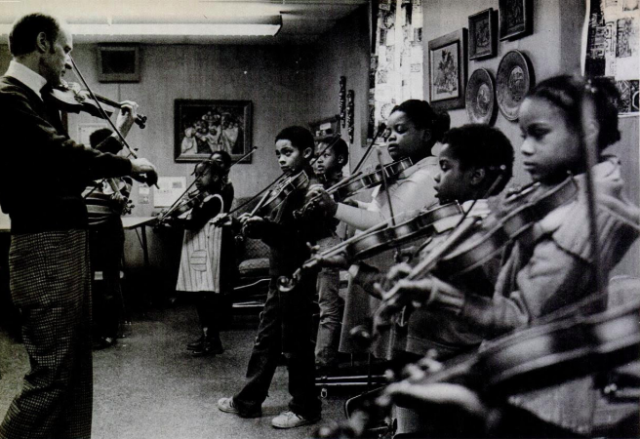 And here is East Cleveland’s Shaw High School competing in the Academic Challenge competition on local TV in 1977. 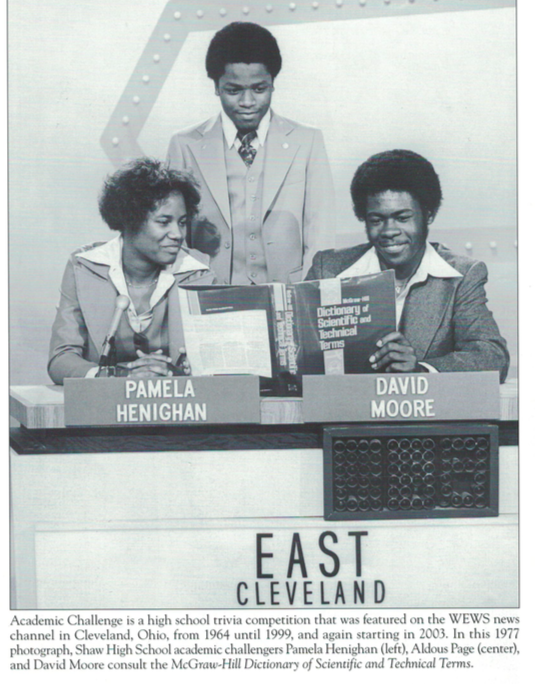 A decreasing population, declining tax base, and general mismanagement raised increasing fiscal issues for East Cleveland in the 1990s and 2000s.  As East Cleveland entered its third decade of on-again-off-again emergency fiscal management, interest began to grow around annexing East Cleveland to neighboring Cleveland.  Although not unprecedented, such an annexation would be the first such merger in recent history.  (Incidentally, what we now call the Ohio City neighborhood immediately west of downtown was actually a separate city until it was annexed to Cleveland in 1854.  That’s why it has its own flag.)

In 2016, East Cleveland was struggling to provide basic services.  East Cleveland had to borrow snow plows from the state to clear the roads and even borrow an ambulance from a neighboring city when its last one broke down.  Ohio’s Office of Budgetary Management was saying things like, “it is unlikely that East Cleveland will extricate itself from its financial distress any time soon and the commission has limited to no ability to remedy the current status.”

The biggest issue, however, was that many residents in East Cleveland did not — and do not — want to merge.  In December 2016, East Cleveland residents successfully recalled Mayor Norton due, in part, to his efforts to annex the city to Cleveland. 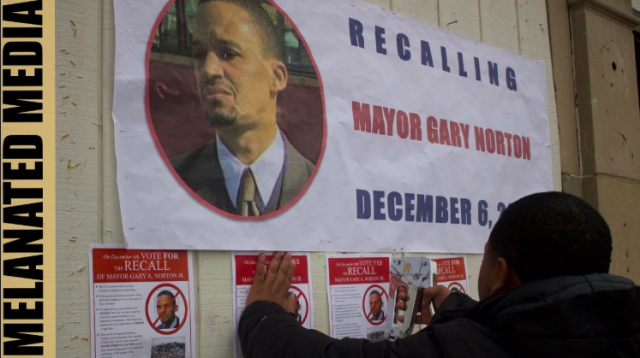 Views differ across the city, but many East Cleveland residents like their autonomy.  They’ve been born and raised in a town that is proud to be not Cleveland.  Merging with the city they were proud to not be a part of seemed heretical to some.

Progress and Prosperity in East Cleveland

At the end of these responses, I have tried to pick a small detail from the episode and pivot to tell a related story.  This week, the pivot isn’t so much intellectual as physical.  We spent a lot of time this episode at East Cleveland City Hall — which is also the police headquarters, court, and administrative offices.

If you exit City Hall and look across Euclid avenue to your left, you will be looking at the East Cleveland Public Library, which is part of Northeast Ohio’s extensive and nationally–recognized network of public libraries. 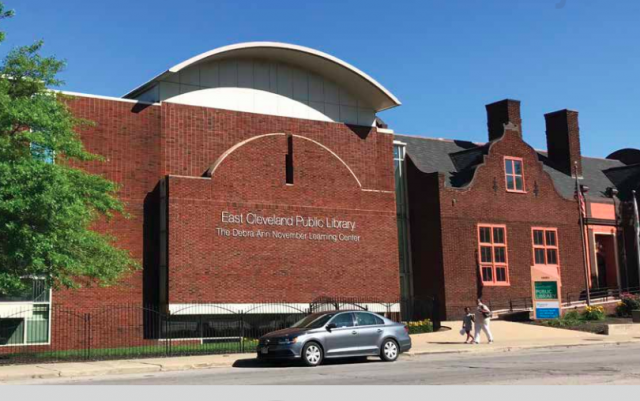 The building was opened in 1916.  You’ll notice that both John D. Rockefeller and National Electric Lamp Association make appearances in the founding of the library. 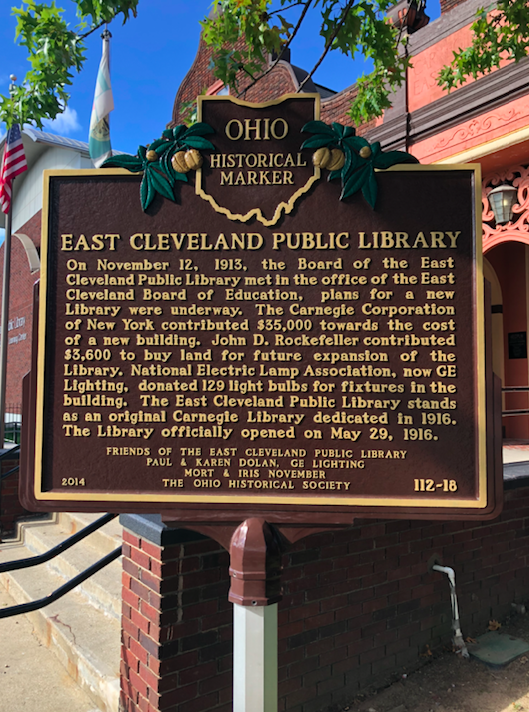 The building still (faintly) bears the original Carnegie Library name above the doorway. 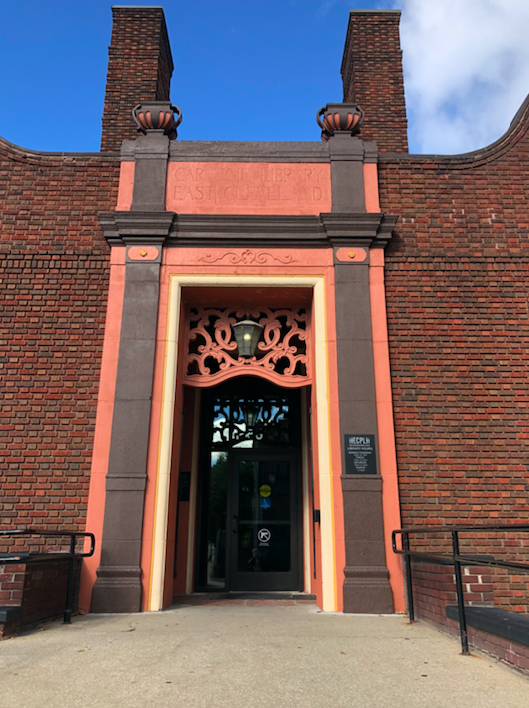 The library has a great collection and many resources for residents. Plus, if you haven’t had a reason to go to East Cleveland recently, the library is sponsoring a concert by a jazz flautist this Sunday. The concert starts at 4pm. 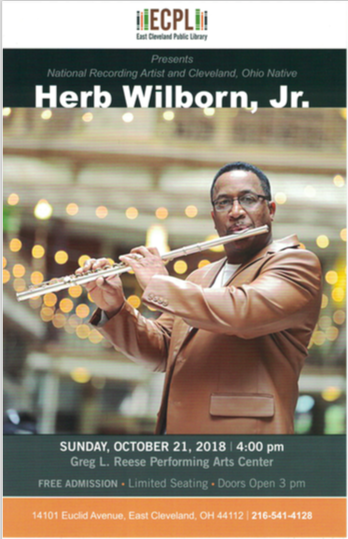 Or you can check the full calendar of East Cleveland Public Library events here.