Episode 8 brings us to Ohio’s juvenile justice system.  We follow the story of Joshua, a teenager who got caught up in the system after joining the Heartless Felons and committing a string of robberies.  After being caught, Joshua does the one thing law enforcement has been trying to get defendants to do: talk about fellow gang members and snitch on his peers.

But the story does not end well.  Joshua ends up in Ohio’s juvenile detention system, which Koenig emphasizes, has been labeled a “model” system nationally.  Ohio’s juvenile facilities contain only 500 kids, but these are among the “more traumatized and higher-needs” kids in the entire state.  As the episode unfolds, we see that, many times, the kids end up controlling portions of the facilities.  Indeed, Koenig thoroughly documents an uneasy co-existence that emerges between the guards and the teenagers housed at the facilities.

The system is unable to protect Joshua, who is ultimately targeted for his testimony against other gang members.  Moreover, when the Ohio Department of Youth Services cracks down on mismanagement and institutes a zero-tolerance policy, Joshua is threatened with invocation of his Serious Youth Offender (SYO) suspended sentence.  We will hear how Joshua’s story ends next week, which will be the conclusion of Season 3.

This week we’ll explore the juvenile facilities, but also turn to two other issues that you have to consider when thinking about juvenile justice in Ohio:

Finally, we’ll end with the story of how one group of Cleveland volunteers is bridging the educational gap for Cleveland teenagers.

If you are looking for some visuals to complement this week’s episode, you can see a virtual tour of the Cuyahoga Hills facility or the Indian River facility. 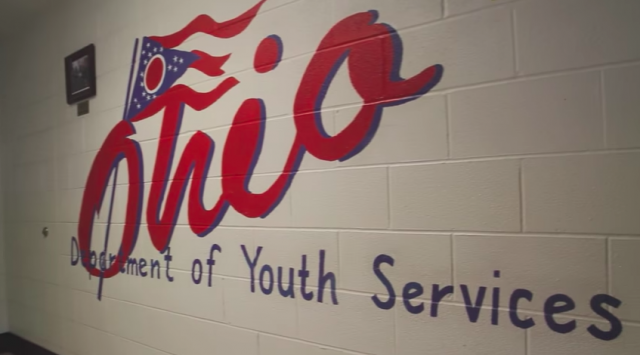 A mural at Cuyahoga Hills, taken from a video lauding ODYS’s transformation of the institution.

The abuses and power dynamics identified in this episode are hardly a secret in Cuyahoga County.  Just a few weeks ago, Cuyahoga County settled a case brought by 4 juveniles who claimed that they were forced to fight for the guards’ entertainment in so-called “fight nights.”

The Juvenile Justice Coalition (JJC) is one of the leading organizations in the state to address questions of juvenile criminal justice.  The JJC has a variety of helpful reports and policy documents to help better understand what is happening state-wide.

As Koenig notes, the state is particularly proud of deincarcerating its juvenile facilities since the mid-1990s.  Ohio sees itself as a leader nationally on juvenile justice issues.

Courtesy of the Juvenile Justice Coalition

Despite these deincarceration efforts, racial disparities are still persistent: 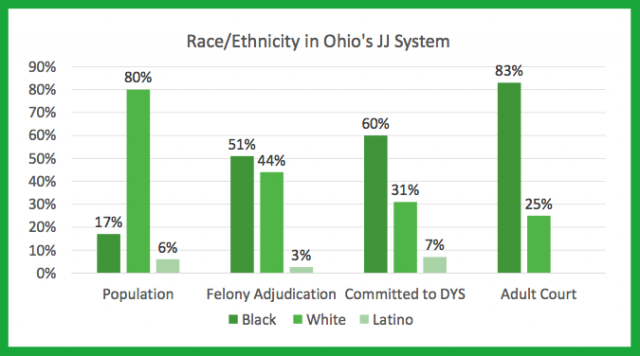 Courtesy of the Juvenile Justice Coalition

Aside from the flagrant abuses we saw in this episode JJC has recently homed in on one of Koenig’s major themes throughout this season: the lack of data in the criminal justice system.  JJC released a report outlining the lack of data in Ohio’s 90,000 juvenile cases, and the limitations that lack of data puts on understanding and reforming the system.  In Ohio, the problem is particularly difficult because each county has its own home rule authority and its own division of youth services.

JJC has outlined a path forward, which could serve as a guide for data implementation in adult court.  JJC summarizes it in this infographic, but provides much more detail in the full report linked above.

If this episode made you want to learn more about Ohio’s juvenile justice system, JJC is a good place to start.

Educational Inequality and the Sideaway Bridge

For the remainder of this response, I will pivot away from Joshua’s story at Indian River and Cuyahoga Hills, and turn instead to two issues that are crucial to contextualize youth violence in Cuyahoga County: failing schools and lead poisoning.

As a reminder, Cuyahoga County contains no less than 32 separate school systems.  When you map those schools’ state-wide report card grades on top of a map of income, you see an obvious pattern. 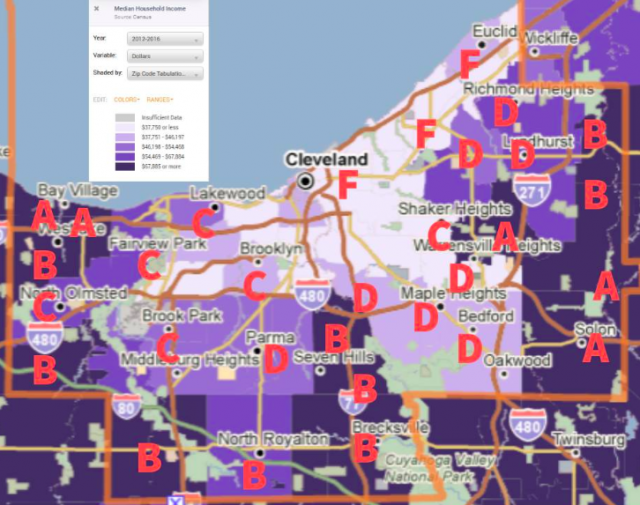 (This graph was made by a local advocate and posted to Facebook when the school report cards came out in September.  However, I cannot for the life of me find the original post to give credit.  It’s been shared many times elsewhere, though.  If you know who made it originally, please share it with me and I will update the SerialLand website accordingly)

Indeed, educational inequality across the County has arguably deepened over recent decades rather than improved.  According to a report on Brown vs. Board of Education after 60 years, Cleveland was one of many urban districts where racial segregation has worsened since 2000.  In 2017, Ohio’s school districts ranked the highest in the nation for economic segregation, with boarder lines between the Cleveland Municipal School District (CMSD) and neighboring suburbs ranking among the most disproportionate.

I certainly can’t solve the problem of urban education in this newsletter.  But I do want to link the current disparities to the history of Cleveland’s structural development to argue that understanding our racial history is an integral part of understanding where we are today.

The Sideaway Bridge is a forgotten corner of Cleveland that illustrates this history particularly well.  Through the first half of the 20th Century, the Sideaway Bridge was a 680-foot-long pedestrian suspension bridge that connected an isolated corner of the Slavic Village neighborhood with the Kinsman neighborhood, across a natural dip in the landscape where a stream runs 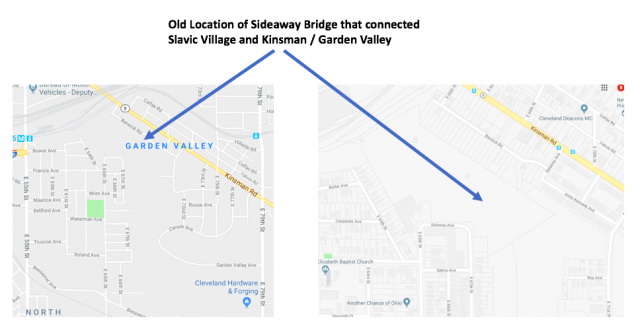 At that time, Slavic Village was an all-white neighborhood and Kinsman all-black. However, school children from Kinsman could cross the Sideaway Bridge to attend the Tod elementary school in Slavic Village. 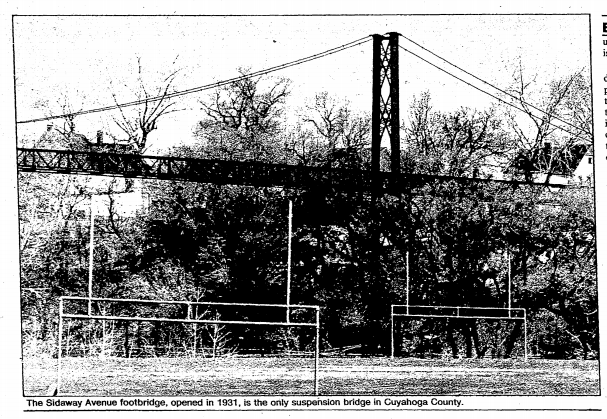 Tod School’s enrollment was 28.7% African-American in 1954.  However, the bridge fell into disrepair and was closed — supposedly temporarily — in 1960. The number of black students at Tod dropped to 0% within a year.

The bridge was not repaired and in 1966 when the Hough Riots broke out, the white residents of Slavic Village burned portions of the bridge in a racially-motivated effort to keep out neighbors who didn’t look like them.

Cleveland still did not repair the bridge and the elementary schools on either side remained fully segregated.  In 1976, Federal Judge Frank Battisti held that Cleveland had illegally segregated the city schools.  In his ruling, he specifically pointed to the Sideaway Bridge as a deliberate example of “containment” of racial minorities.

The bridge has never been repaired.  You can still see it today: 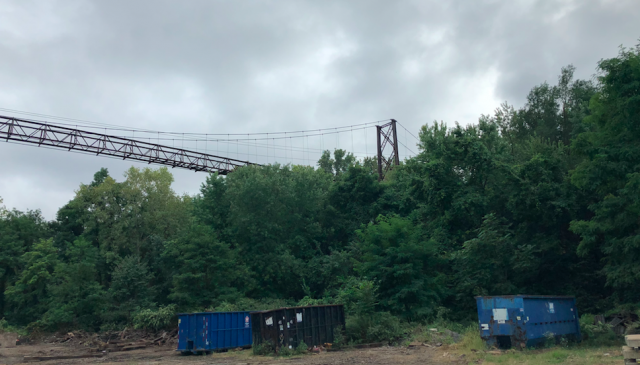 And you can even (at your own risk) get up into the remaining frame, which is now overgrown from decades of neglect: 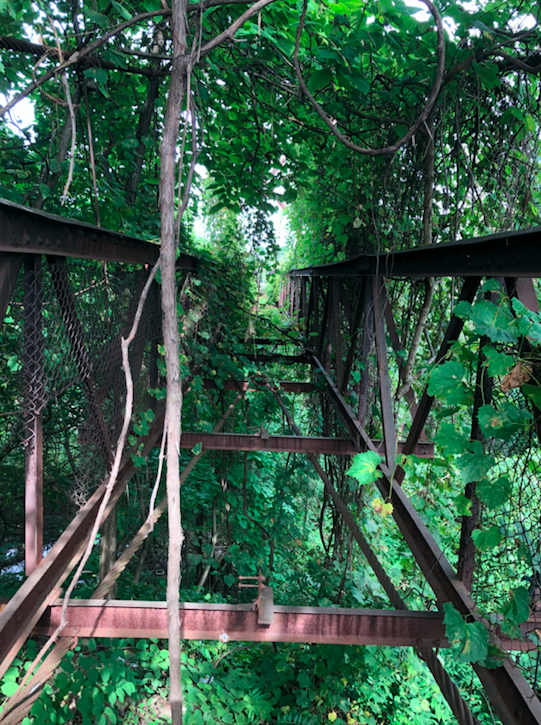 I took these photos on a brief trip with other community advocates to begin brainstorming what could be done with the area.  While we were there, two Cleveland Police Officers came by in a patrol car and noticed our vehicles parked at the dead end on the Slavic Village side.  The CPD officers called out and asked us what we were doing at the bridge.  When we walked over to them and explained why we were there, the two white CPD officers turned to each other, looking surprised.  “Repair the bridge?” one said, “But do you really want people from Kinsman coming over here? Isn’t that why the bridge was burned in the first place?”

Lead is an environmental toxin that can be found in water pipes, paint, and even soil that has been exposed to fumes from leaded gasoline.  The body mistakes lead for closely related elements like iron and calcium, depositing the toxin in the brains and bones of growing children, causing neurological deficits and, in extreme cases, physical disorders like seizures. 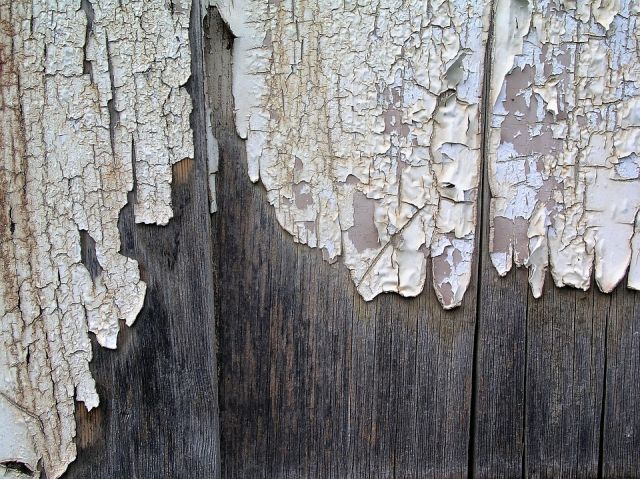 There is also increasingly strong evidence for a link between lead and criminal behavior.

“The lead-crime hypothesis is pretty simple” writes Kevin Drum in Mother Jones Magazine, “lead poisoning degrades the development of childhood brains in ways that increase aggression, reduce impulse control, and impair the executive functions that allow people to understand the consequences of their actions. Because of this, infants who are exposed to high levels of lead are more likely to commit violent crimes later in life.” 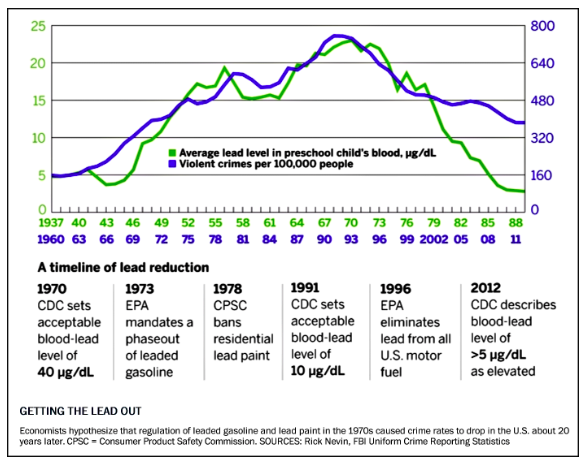 The link between lead and crime is particularly relevant in Cleveland because our city has utterly failed to address the ever-growing crisis.  We have minimal proactive testing, and essentially rely on children to be our lead detectors in older homes.

In 2015 the Plain Dealer’s Toxic Neglect series outlined stark failings by the City Health Department to follow up on cases of confirmed lead poisoning.  The series also made compelling links between structurally racist housing policies and the deteriorating housing stock that is more likely to poison children.  The Public Health Director resigned as a result of the revelations in the Toxic Neglect series.

However, the problems continued.  In 2017, I was part of a litigation team at the Legal Aid Society that sued the City of Cleveland for failing to follow Ohio’s laws on lead poisoning.  Among other problems, the City knew about more than one hundred homes with expired lead hazard control orders, yet the City had taken none of the required measures to ensure that young children were not still residing in those homes.  In 2018, the 8th District Court of Appeals issued an order requiring the City to put up placards on the affected homes. 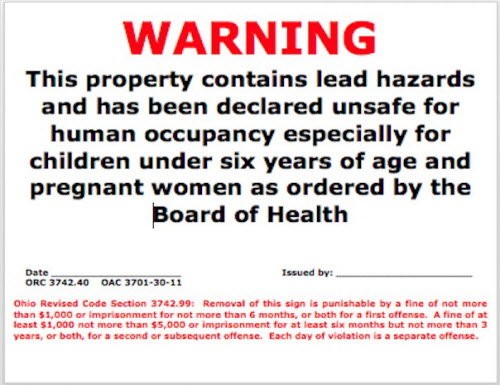 The fight over how to protect Cleveland’s children from lead poisoning continues.  If you want to get involved, I suggest following the work of Rachel Dissell and Brie Zeltner, who have continued to follow the lead crisis for Cleveland.com.  You can join the Cleveland Lead Safe Network, a community organization working for systemic reforms.  Or you can attend CLSN’s fall convening on November 17th at 12pm at the DoubleTree in Beachwood (3663 Park East Drive) to get connected to other efforts.

Both this episode and this response contain a lot of bad news about Cleveland’s youth.  But the picture is not all bleak.  One of the things I look forward to the most each week is spending my Saturday mornings with a group of Cleveland high school students enrolled in a program called MindsMatter.

MindsMatter serves low-income, high-achieving students within Cleveland and nearby school districts.  The program has only one paid staff member and relies on 150 or more volunteers who help provide a sixth day of school for students.  In the morning, students get college prep classes and in the afternoons there is one-on-one mentorship.  MindsMatter pays for its students to attend pre-college summer programs after their sophomore and junior years.  These programs prepare MindsMatter students to make the leap to college. 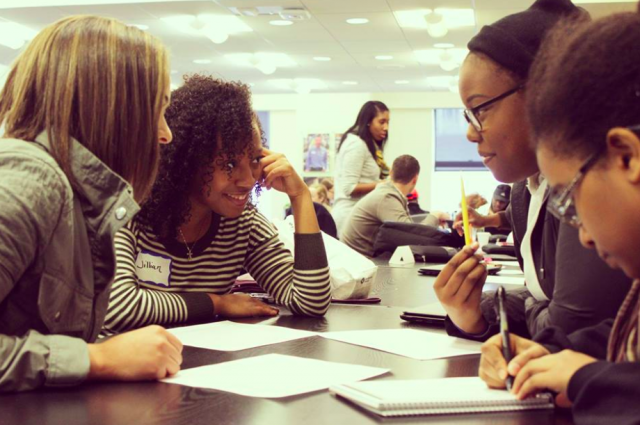 MindsMatter has 100% matriculation to colleges, and 92% graduation from college–compared to 51% and 47%, respectively, from the general CMSD population. 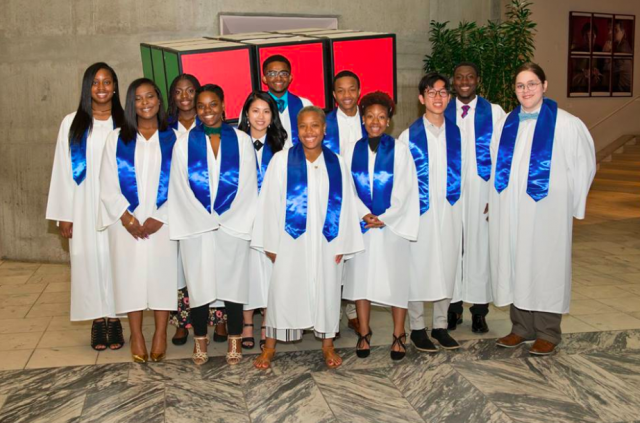 Despite all the challenges in their lives, there are a lot of incredible kids in Cleveland making great decisions for their future and the future of their communities.  No matter how bad the world is, I never cease to leave a Saturday MindsMatter session feeling slightly better about the world.